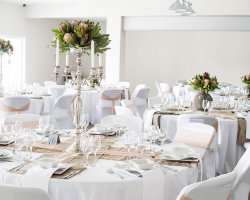 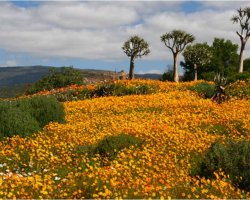 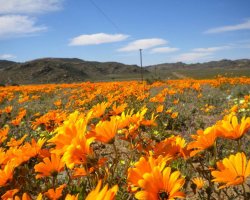 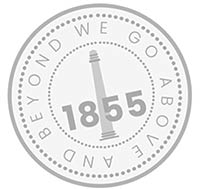 The little village of O’okiep gets its name from the Nama word “U-gieb”. There are variuos meanings to this word, namely:

the great brackish spring,
the place of the big tree &
the little fountain.

O’okiep is situated, Namaqualand, 8 km north of Springbok and 120 km south of the Namibian border. We are 560 km north of Cape Town, 950 km south of Windhoek, 380 km west of Upington and have the sea as our western border (100 km).

O’okiep is the oldest mining town in South Africa where copper was first discovered and mined in 1855. It used to be the centre of South African copper mining. The large copper resources had been discovered in 1855 already and Okiep experienced an immediate boom. A railway line from Okiep to Port Nolloth was built in 1866 for shipping of the copper. Because there was not enough water for the steam engines, the Namaqualand Mule Train was pulled by mules until 1890. In 1918 the Okiep copper mines ceased operating and the place almost became a ghost town. In springtime, Okiep is - like the whole of Namaqualand - very rich in blossoming wildflowers.

The tourist centre of Okiep is the excellent Okiep Country Hotel. The hotel houses a very popular restaurant and bar. Also offered are 4x4 tours into the surrounding areas, including the visit to a diamond mine at the coast and to the Richtersveld National Park. Okiep is the right address to appreciate the beauty of Namaqualand. 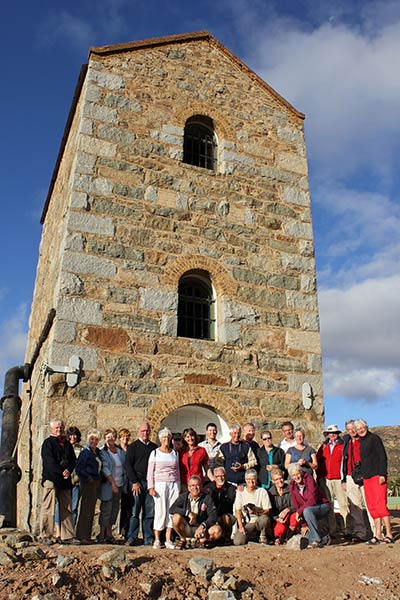 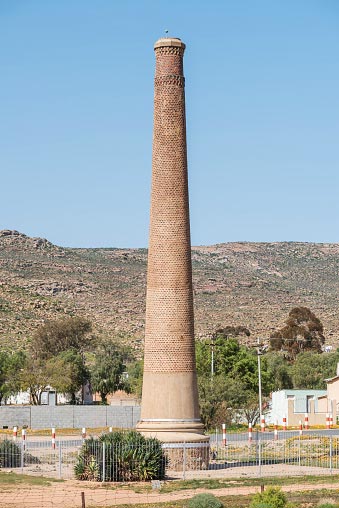 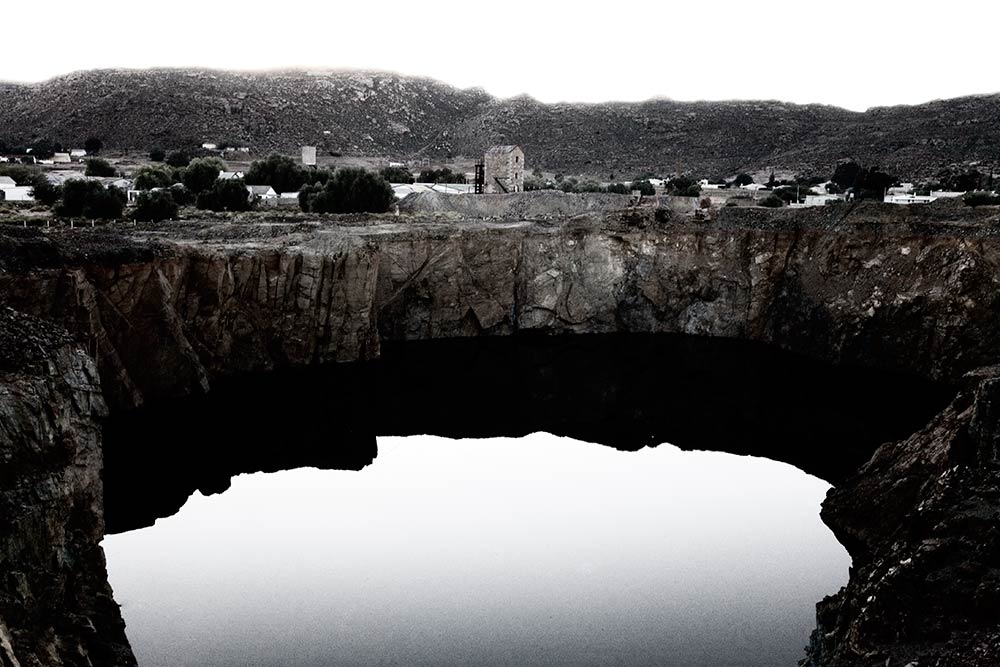 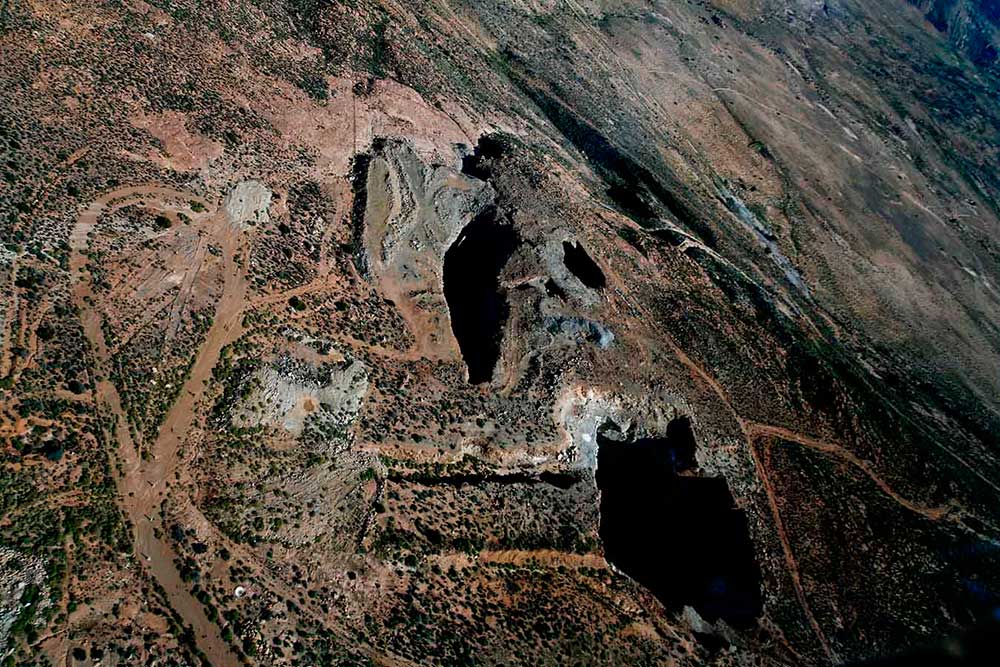 O'okiep is the oldest mining town in South Africa where copper was first discovered and mined in 1855. The town of O'okiep was surveyed in March 1856. In the 1862 Phillips and King, who started the mining activities in Namaqualand in 1852, was taken over by a London based company which was called "The Cape Copper Company" and they continued mining in Namaqualand until the May 1919 when production ceased. In that period the Cape Copper Company made a total profit of some 6,500,00 pounds and paid dividends to its London based shareholders to the value of 4,433,125 pounds. In 1927 Newmont Mining / American Metal Company, two American mining houses purchased the Namaqualand Copper Fields from the defunct Cape Copper Company and the O'okiep Copper Company was formed in 1937 and started mining in 1940. In the 1960's the O'okiep Copper Company which was floated on the New York stock exchange during the 40's paid the highest dividend ever on the NYSE for that period. In 1984 Newmont sold the Okiep Copper Company to Goldfields of SA who are still mining in Namaqualand today. Namaqualand was known as the richest copper mining area in the world at the turn of the century.

O'okiep was for many years the centre of the Namaqualand copper fileds which was known at the turn of the century as the richest copper mining area in the world. This in turn made O'okiep famous during the last phase of the Anglo Boer War when O'okiep was besieged by the Boer Commandos under the command of General Jan Smuts for a period of 4 weeks ( May 1902). When General Smuts invaded the Cape Colony in September 1901 the commandos made their way to Namaqualand via Calvinia with the idea of taking the rich copper fields and therefore forcing the British to send their troops to O'okiep. This would have left Cape Town open for attack by the Boer Commandos. Unfortunately for the Boers this did not happen as in late May 1902 General Smuts was called back to Pretoria for the signing of the Peace of Vereeniging in June 1902.

O'okiep is therefore very rich in history has two national monuments, namely a Smoke Stack (ventilation shaft) and Cornish Pump House.This Cornish Pump House is in fact a steam pump engine which is fully intact and is the only remaining pump house of its sort in the Southern Hemisphere. Many of these pump houses remain in

Cornwall, England. Much of the old mining works still remain in Okiep, especially the remains of the old Cornish miners' workings in the surrounding areas.

Visitors arrived via the old 2'6" railway line that was first constructed in 1867 and completed in 1873. This line was used for the transportation of copper to Port Nolloth, some 91.5 miles away from O'okiep. In 1892 steam was introduced to the whole line and continued until 1944 when the Americans tore up the railway line.

All passangers were off loaded at Port Nolloth harbour from the ship via a giant basket which held up to 4 people and swung onto the jetty. This must have been a pretty hair raising experience.

....if the natural scenery is dull and uninteresting from its nakedness, the industry is different, and is very striking. After travelling for two days through a country (from Port Nolloth) so naked, and barren and destitute that for miles and miles around you, yourself and your outfit are the only living, moving things on which the eye can rest for relief, you come at once, after topping the low hills, on a scene of animated industry which has no equal in South Africa, or, perhaps, on the Continent of Africa at all - the resultsof which are visible in the acres of pure stone in one immense spread, some ten or twelve feet thick, turned up from the mine, and the large stackes of copper ore, and the great extent of the refuse. There are stores, and offices and stables, and workshops, and large deposites of machinery, and a steam- engine and all its gear in full working, and a church (used also as a school and reading room), and a contractor's store, and an infirmary for the sick, and residences for the mechanics and miners; and in the rocks around the valley are pretty little cottages for the officers; and around the southern and western slopes are the different locations of natives, dwelling in houses of gunny bags, - Hottentots, Fingoes, Mantatees, - each in his own location, and two tribes of Damaras, equally distinct; and at the north a separate location of those fragments of humanity that, cast loose from the main body, pass over the boundry line, and live a sensuous life of illegitmacy. All these, between 800 and 900 souls, and some at Springbok and at greater distances, find direct support from the O'okiep Mines.

Officers of superior and inferior grades; clerks, miners and mine mechanics; stokers and a lower grade of mechanics , and labourers of European race and Native labourers: the latter pass occasionally over the bounbary in life's struggle, the one making slight efforts to struggle upward, and the other making rapid strides downward."

The Europeans mentioned above were mostly Cornishmen who developed the mines in the area and worked for the Cape Copper Company. Many Cornish/English surnames still survive today although none of the locals can speak a word of English.

In a 1909 Cape Copper Company Report, the Archdeacon of the Cape paid a visit to O'okiep in December 1908 and was very pleased with his inspection.

Today Okiep (its modern spelling) is a small ex mining town that saw its boom days many years ago and is now only a shadow of what it was. With a population of some 7,500 and with an unemployment of some 75%, Okiep is going through very tough times.

Economically Namaqualand, is also very depressed and the O'okiep Copper Company has some five years of mining life left, when it will close after 150 years of copper mining in the area.